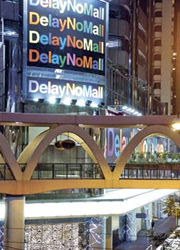 I'd say that's HK youth culture in a photographic ad.

You know how the furniture store G.O.D was raided by the cops for selling T-shirts that say "14K" on the front? Well you prob. know they were the ones who'd been selling "Delay No More" T-shirts for years.

Now the geniuses behind this mall said their "mall" is pronounced in the north american way i.e. "mail", so no one should make the false assumption that they are proclaiming "dieu nei lo mo" to the whole of Causeway Bay.

krntsng said...
This comment has been removed by the author.
9:29 AM

I'm not familiar with the 14K reference... and even more unfamiliar with a so-called North American pronounciation of mall. Mall is Mall, regardless of state or province.

Unfortunately these geniuses can't even back up their own work and use the lamest possible defence. Would it have been inexcusable if they outright said they wanted to provoke? Would the masses not "get" the "artistic merit"? (Not saying there is or isn't any). I dunno... semi-dodgy attempt at semi-tongue-in-cheek progressiveness... HK or WHAT.