So, the kids, B, and Lisa are all back. On my way out to pick them up from the pier, I was greeted by a registered letter from the Hong Kong Police. I was caught speeding on my way to work after I've dropped them off at the pier last Tuesday. Bleeping 8:11 in the am. Fuck me.

It was great to see them. They all smelled of the ocean, they were all slightly tanned/burned, they all were knackered.

Whilst they were away, I contemplated what life would be like, as a single. I have never lived by myself. I was either with family, roommates, housemates, or boyfriends. The strangest thing about living on your own is not talking to anyone face-to-face after you got home (if you didn't go out). And it is the strangest feeling, and I am sure there is a thesis in there somewhere.

I'll need a while to digest it in order to describe it properly.

Anyhow, it was really nice to have the motley crew back again. The apartment is too big without them. Upon his return, J insisted that I take a picture "up his nose", and this is what I got: 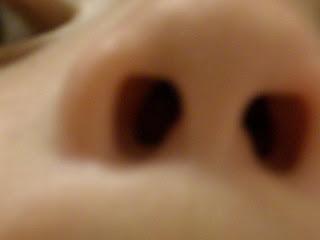 I took several shots and he reviewed the results and said "not close enough". Secretly I think my son is some kind of genius.

And here are my latest baking produce: 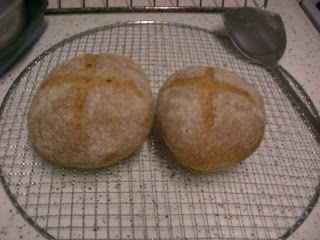 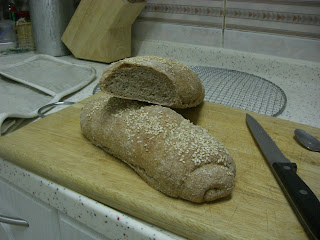 Read the book my mother-in-law sent me a few days ago. About one third of it is about why store bought bread is bad for you. And believe me, if you read it, you wouldn't want to eat another store bought loaf either. When the motley cru returned, they brought with them food they didn't finish at the camp, including 40 bananas, 50 slices of "best value" sliced processed cheese, and two loaves of Garden's "Life Bread" - which are supposed to last 10 whole fucking days before starting to mould.

I was in a bit of a dilemma, you see, having read all that stuff and now faced with all this processed food. It would be a terrible waste to throw all that bread and cheese out, but it would not be right for me to keep it either.

My solution was to let the kids eat the processed stuff, whilst I eat the homemade bread.

Okay there is no logic to it. But the kids are too used to fluffy white bread to appreciate my organic wholemeal stuff, so, you know, well, yeah, no? Huh?