Felt like an idiot on Saturday, as I was walking around town with a shirt that has the words "Chocolate lovers make the best lovers", printed on it.

An old friend was in town on Sunday, so we went out for meal and a drink. He has been living life as a Eurocrat in Brussels for some years, carrying a title that sounds daunting (to someone like me) like, Secretary General something or other. It's good to see him again. Last time he was in town he brought some very nice Belgian beers, and this time it's expensive looking chocolates.

Ate at the Peak Cafe. The one that used to be on the Peak but has now rolled down to the foot of the hill, landed next to the escalators. Food and service both pretty poor. Don't go there.

Then moved to 71 for a drink. This was the first time I sat foot there since the implementation of the no-smoking indoors policy. It was completely empty inside, even the staff were outside. Okay it was Sunday night and it was quiet, but the inside looked sad to me. I wish people, some people, were inside. And why didn't we sit inside? Well I sneaked a Gauloise from the Eurocrat so we had to sit outside as well...

Went to the Government Offices in North Point on Monday to do a gender training workshop, this time is for the Auxilliary Medical Services. It went pretty okay, I thought. I was bombarding them with chart after chart of statistics. I only do it for the money.

After that was over, I went to meet with Fat Boy and collaborators to talk about how to proceed with their Family Project data. They got a huge grant, conducted a (by HK standards) huge study, collected over two thousand cases (nearly 100 questions per questionnaire), and 40 in-depth interviews. Now that the money has all been spent, and those in charge are too spent to write anything, they solicited me, with the hope that I will help them churn out publications. Even though I am already up to my neck in papers I haven't finished, I find this project very interesting and I can't wait to get cracking. Such is my sad life.

Went to O's school today, to attend a "presentation day", which is for the kids to show their parents a chapter book they have written, and a chair they have made for their favourite book character.

O's chair is designed for Snufkin from the Moomin Tales. In his design there were supposed to be pockets down the side for Snufkin's pipes. As you can see below, he didn't quite manage those: 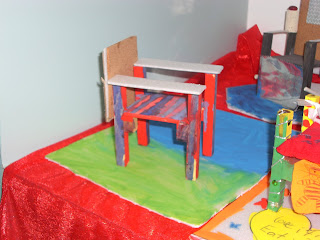 The teacher has prepared a laminated card with a list of questions for the parents to ask their kids. A sneaky method to pre-empt the parents from badgering HIM with questions (smart guy).

Questions on the card are all related to the stories and the chairs they made. Along the lines of "which is you favourite character in your story and why?" "what have you learned from this project?" "what would you have done differently if you can do it again?" etc. Lame, right? But most parents seemed to be religiously following them to the dot. I had already read O's story before so there was nothing new for me. Despite all this, I wouldn't call the visit a complete waste of time, since I discovered for the first time that the kids each have a "playtime journal", where they are supposed to write about what happened at break time. And I read some of O's entries: 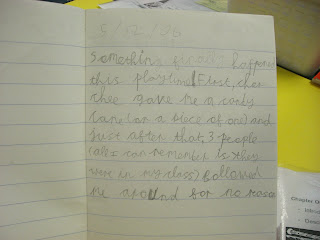 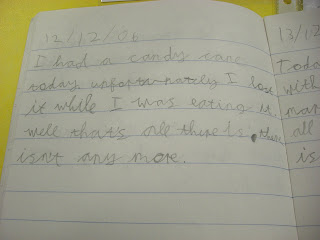 I said to him, how can you lose the candy that you were eating? He said, "er... not sure."

The ungrateful child doesn't like egg in his sandwiches.... 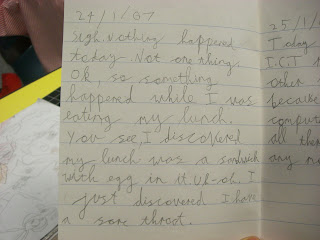 Then, the saga began: 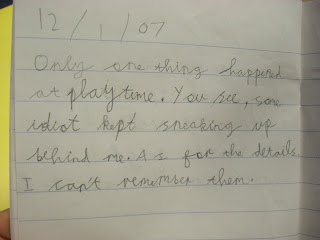 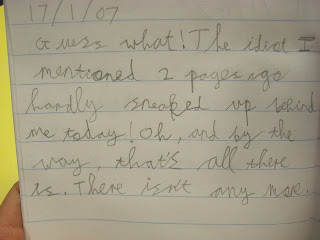 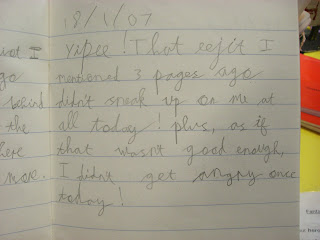 He might have potential to be the next Karl Pilkington.