Yesterday I sat in on a colleagues tutorial classes. The first one is a class on US foreign policy and the other is an introductory politics class. Both classes only has about 10 students in them. The second one is supposed to have 14 or 16 (he said), but only 10 showed up. He doesn't take attendance and there are no presentations. They just sat round and talked. Colleague seemed to do most of the talking but the students chipped in here and there too.

The key, really, is how the tables and chairs are laid out. In all of the rooms where tutorials take place, the setting is a standard "classroom" one, with tables arranged in rows facing the whiteboard. Now of course that kind of setup is not designed for discussion-based classes and so each time my colleague and his students have to re-arranged the tables and chairs, and return them to normal after class is finished. Bit of a nuisance (these tables are heavy) but I think I'll start doing that next term also.

Went to After 5 last night and it was heaving. I had (I think) 5 pints of Boddingtons over four hours, and was not feeling terribly well this morning, to put it mildly. After a couple of nurofens and five litres of tea, my head seems to have stopped spinning.

I have this cunning plan of drinking only at weekends from now on. No one enjoys hangovers and the older I get, the harder they hit. This week I drank on Monday night and last night ONLY! May not sound like much to many people! but this is quite something for me, me who has been consuming a least a couple of units everyday for the past fifteen years or so. Reason I'm doing this, apart from limiting self-inflicted pain, are 1. to save some money, and 2. to consume fewer calories. Even though I only ever drink cheap plonk, the bills do add up, and so do the calories. If I could stick to the plan, I reckon I could save at least a couple of thousand dollars (and calories) a month.

Anyhow, will see how it goes.

Did anyone notice that monkeys are hideous to look at? 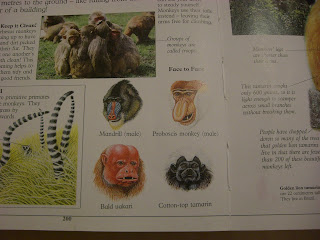 The red one looks as if it's got an ass for a head. The one with the flattened nose looks creepily obscene, and the one with black face and white hair looks like someone I used to know.

Read recently that a zoo in Belgium is asking patrons to not stare at its monkeys. Apparently if they have too much eye contact with humans, they start getting funny ideas that they ARE humans.

Yeah. So, you go to the zoo to NOT look at the animals. Right.

Here are two loaves of bread: 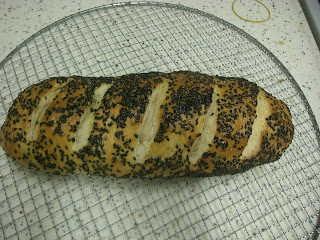 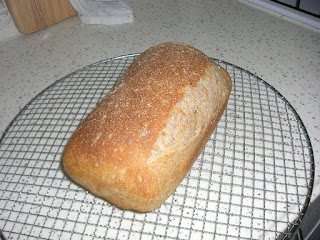 The one with the black sesame seeds is pretty hideous looking, innit (still, not quite comparable to those monkeys), and it smelled strangely fishy. Yes. FISHY. Might it have something to do with the fact that I bought them in a Japanese store? Perhaps they are designed for sushi rolls and therefore are fishy-smell infused?

I still haven't figured out how to slash the dough in such a way to end up with nice splits. Sometimes they work, and sometimes they don't. None of the books I've got gave any advice on this at all.