I bought the book Artisan Baking for B's birthday and have been ha ha hahahahhh!!! YES YOU GUESSED IT!!!!! I've been trying to make "artisan bread"!!!

What on earth is artisan bread??? I hear you ask. Well....From what I've gathered so far, it refers to bread that looks fucking great and takes a minimum of 24 hours to make. Well here's my version of somewhat vaguely artisanishy bread: 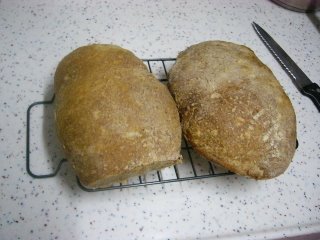 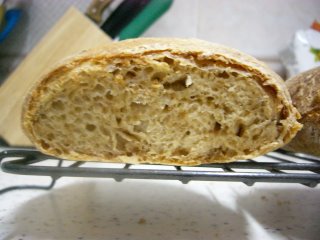 As usual, I didn't follow any one recipe to the dot. I'm just too much of a sloth to be studious about this. I read bits of the book, here and there, when it suits, and then put something together in a way I best remembered. I can't stand referring to the flipping book every five minutes. It all starts to get pretty confusing after a while, anyway, particularly if you've been drinking wine as you go along.

For these two loaves, I think I was aiming for a ciabatta type result. But as you can see, they don't look anything like ciabatta. If you are honest, you will have to agree with me that they look more like two small boulders that had been tragically flattened by some mammoth tribe or other during a stampede and had been buried under miles of ice in the North Pole, only to have reemerged recently thanks to global warming.

Pardon me I'm rambling a bit now. And here are my brownies: 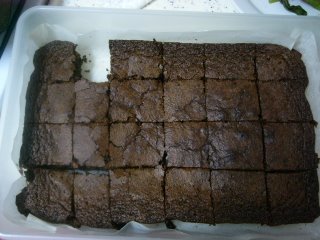 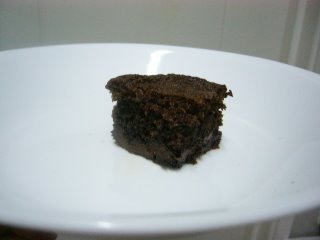 Well, what can I say. Apart from the fact that they are, er, pretty brown.

Ok I can't take it anymore - I've been having flashbacks about eating those perfect brownies for the past few weeks. Post the recipe. Or at least bake a batch for me. I'll gladly pay.