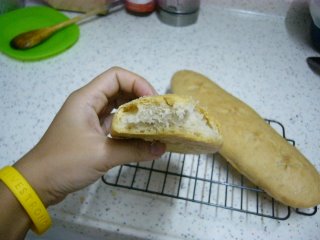 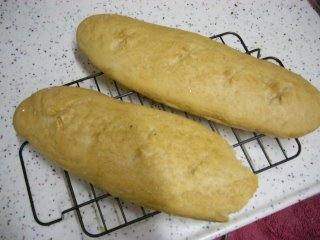 In fact, incredibly, they were so tasty that one has already been demolished by myself and J. The crust is pale because I glazed with olive oil instead of butter; the loaf is flat because there wasn't really enough dough for two loaves and I should have used a french bread baking trough (which I don't have, heheh).

Anyhow, much encouraged by this unexpected success, the plan now is to make a sourdough starter. To do this, according to the instructions, you throw together some plain flour and semolina flour, mix it with some water and juices obtained from scraps of veggie peel or rotten bits of fruit - preferably bits that have been stewing in their own bacteria in a warm place (like the bin or the compost heap, I guess). Then you repeat the process of feeding it every four hours, leaving it out on the counter, sticking it in the fridge, and so on. It should be full of "complex" flavours, it says in the book.

juice of a compost heap...? that sounds a bit gross...

That's all natural goodness, that is.