China gave me a nightmare

In many ways southern China is just as I had expected. Driving through, there are highway tolls every two minutes, there are large chunks of perfectly nice hills shaved off for no apparent reason, there are shanty town type huts dotted here and there, there is the occasional sad looking patch of vegetable field, and there are labourers in groups of three and four shuffling dirt under the midday sun.

The resort we stayed at was quite nice in a generic kind of way. Upon arrival, we had a generic Chinese restaurant type lunch that you will find in any hotel, followed by four hours of meeting, then dinner, where three dishes were identical to the ones we had for lunch. 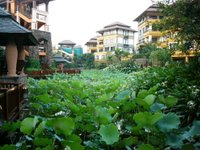 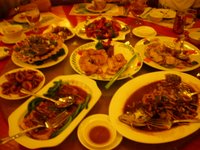 I was surprised that they charge RMB 88 for a jug of draft Carlsberg and RMB 28 for a can of Heineken. After dinner I played pool (RMB50 per hour) and table tennis (RMB20 per hour). By 10 pm everything shuts down. I retired to my chambers whilst the other fools all crammed into one of the larger rooms to watch the World Cup. Well the England Sweden match was not on till 3 am or something so I did have problems believing them when they said they were just gonna sit around chew the fat unit the match came on. Given their track record I'm sure some of them sneaked out to sample the local facilities if you know what I mean.

That night, after waiting for the longest time for the bath to fill (it was very deep and very big compared to the one back home), I had the most vivid nightmare I can remember. 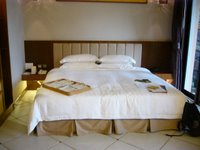 In my dream, I was sleeping in the bed, and was woken by the noise from the air-conditioner. When I opened my eyes, I saw a Chinese man, standing by the edge of my bed, looking at me. He had short straight hair parted on the side. I couldn't see his face, but knew he was Chinese. On seeing him, the thought that went through my head was how did he get in? I locked the door and the windows before I had a bath and I checked them again before I went to bed. I pulled the sheets up (I was sleeping naked) and I said to him

What do you mean just checking?! How the hell did you get in!!

It's okay. I just came in to check everything is okay.

All the while, he did not move. My heart raced as the clock ticked. I had to do something. Say something.

I locked the door and the windows! Who are you and how did you get in! Tell me now!

And before I could reach for the phone, he leaned over towards me.


It took me a while to calm down again. My much needed hipflask was not with me (stupidly enough I forgot to bring it). I checked the door and the windows again. I read a bit of Charles Bukowski. I said the Lord's Prayer several times. I had a bit of a heart to heart with God.

Then I fell asleep again.