Spent an hour last night marking some of the essays from a mid-term test I gave, well, mid-term (it's now three weeks to the end of term). I was surprised by how good many of them are. They really studied, and many of these essays were not just regurgitation. Hmmmm. Me, very impressed.

Skived off early; the afternoon was too nice for my butt to be glued to my office chair. Took a walk around Taipo market, walked around the park a bit, then strolled for a bit in Taipo Centre, ate a bowl of cuttle fish ball noodles, bought a hole puncher, a salad from Jusco, and a comb from an old guy selling his gear on the sidewalk: 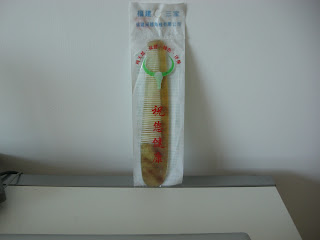 It is supposed to be made from buffalo horns. On the packaging it says "Wish You Good Health". When I took it out from the plastic, a strong whiff overwhelmed me; it is what I imagined my ancestors' remains must smell like.

Then I headed home, took a nap, and had an hour of tennis lesson.

I asked the coach, has it been three months since I started? He said yes, roughly three months. I said, I thought I would be doing much better than this by now. He said, no, you are doing very well already, he muttered. I know he is lying. I said, when will I get better? This rate I'm going? When can I start playing games without spending half the time picking up balls? He said, well... depends on who you play with. La dee dah....