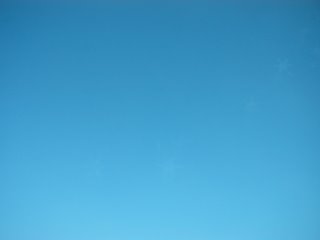 This is the colour of the HK skies these past couple of weeks. Until today, that is. Today they sky is not blue. Today, it is a dreary non-descript grey, much like how I'm feeling right now.

Luckily the weather had been great over the weekend, where we spent two nights in Lantau and took the newish cable car to Ngong Ping, you know, where the Big Buddha sits. Below are views taken from the ride: 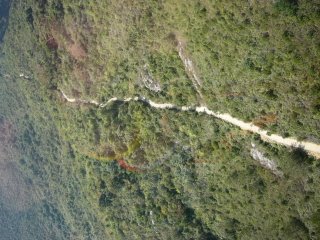 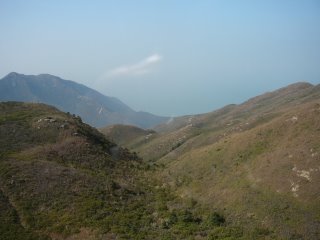 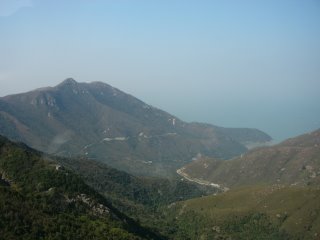 It was the 31st when we went, it was pretty packed, and we had to wait for around 45 minutes before we got on the cable car. There were signs everywhere saying that each cable car is supposed to hold 17 people. From that alone you might think that they are pretty big. Well don't let them fool you. In each there are seats for 10 regular sized human adults, and probably standing room for another three. How on earth can you hold 17 in each one, I have no idea.

So anyway, the ride lasted around 20 minutes and it was really spectacular, especially on a clear day like the day we went. What ruined it all, was that stupid tourist trap they named "Ngong Ping village" situated right at the stop. Predictably it consists of souvenir shops, crappy eateries, rip off "shows" ($35 to watch a cartoon lasting for 15 minutes about a bunch of monkeys - not even real monkeys!), a Starbucks (of course), and a 7-11. Why can't they call a spade a spade? Call it the Ngong Ping visitor's stopover, call it Ngong Ping toilet stop (for there are plenty of toilets all in very good condition). Why call it a "village"? It's anything BUT a bloody village. Nobody bloody lives there.

We stayed at the newish hotel in Tung Chung, and here is a picture taken inside: 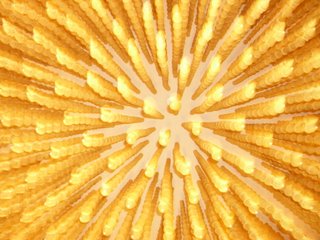 What does this look like to you? I was intrigued by its resemblance to hundreds of flesh coloured vibrators, hanging from the ceiling.

Our helper Lisa, is not coming back till I don't know what time tomorrow. B's back at work so yesterday, today and a good part of tomorrow I'll be in charge of the two boys, all by myself. I will not pretend that I'm loving it, even though I'm not hating it either. But I can't wait till Lisa comes back.

Luckily, J has two new found buddies, Kevo and Stevo, two surprisingly well-behaved and mild mannered little boys who live in the next block. They have been playing together all of yesterday and today, playing some ultraman game which they never seem to tire of. They play in the playpark downstairs, then play in their home, then play in our home, and then back to the playpark again. J called just now to ask "when do I have to come back?" and I said "whenever you like" to which he replied "whooopeeeeeee! Thanks mom!" and then hung up.

Meanwhile, O has been, predictably, doing a lot of whooshing about and muttering "ex-ter-mi-nate..... ex-ter-mi-nate", re-enacting scenes from episodes of Doctor Who . Right now he's being forced, by me of course,to sit at a table to write a descriptive essay on what he's been doing the past few days. He's finding it painful. To which I wanted to say, "well, painful now, is it.... you should imagine ME having to watch you do this.... now THAT is what I call painful!" I haven't started drinking yet so I had the good sense to hold my tongue. Don't want to add yet another scar to his already traumatic childhood now, do I.

I was being sarcastic, of course. It's ME not him that's traumatised by his childhood.