From the big lychee

A barrister was rushed to hospital, in the night, accompanied by two women. His penis was bleeding. At the hospital, he swore at the staff, called his female companions whores, and caused a scene.

Same thing happened again a couple of weeks late. He bled, he was rushed to hospital, he called his female companions whores.

Reporters, being the kind that many are in Hong Kong, sought him out for an interview. He lives with his mother. He said his full-time job is investing in the stock market. He dug out a load of papers including medical certificates, to show the reporter that he is sane. One of the papers said he has been treated for schizophrenia and alcoholism. He said his penis is fine. He said he did not take Viagara.

To prove his point, he dropped his pants in the middle of the interview to show the reporter his healthy penis. 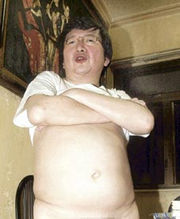 The Bar Association said they have no record of the barrister's mental health history. They do have a record of him representing a client in court in 2005, though.