B&S, and Pierre, in Melbourne 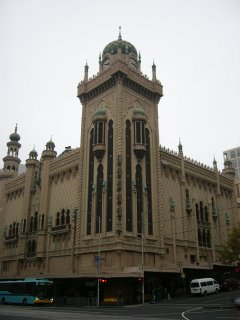 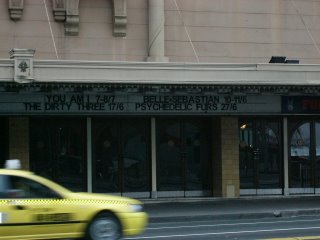 The show was at the Forum Theatre, a piece of architecture that really stands out in the city centre because of its freakishness. Freakish not just on the outside but inside as well. It's decorated in this mock Greek style with lots of statues of naked men. Cheesy or post-modern? I can't decide. I'm not the only one who noticed this. For when Stuart re-emerged for the encore, he felt compelled - I say compelled cos no one seemed to have made him - to climb up to one of these life-sized Davids, forty feet above the ground, and you can see he was tempted go to for its crotch! but had the good sense to settle for a grab of the gluts instead. On his way down he nearly knocked off a giant speaker. God bless him.

Someone managed to video this bit where they sang an impromptu version of Van Halen's "Jump" after Stuart landed on his feet:

Anyways, back to me, their number one fan. I was wildly excited. I grinned uncontrollably and was shaking my head from side to side in such a vigorous manner that my neck is still hurting. But then again, as with the New York show, some folks were just standing there, NOT MOVING. AT ALL. I have no idea how they managed that. 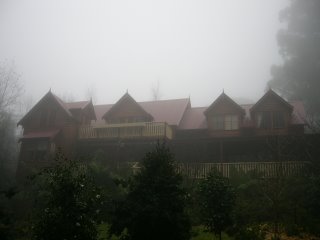 Both B and I was saying that if we hadn't booked a night in Mt Dandenong we would have loved to see their Sunday night show as well. But since we had already booked, we took the train and then a taxi up to this B&B which goes by the name of Attic House. Had a very nice meal at a restaurant called Sacreblue! Mussels from Tasmania the size of my phone, two inch thick porterhouse steak, more than drinkable Australian Shiraz, everything at a fraction of the price in Hong Kong.

As you can see from this picture, taken on the day we left, it got really foggy. If not we would have gone for a walk or even a run before we left.

Before the fog attacked we went to the William Rickett's Sanctuary - which is weird beyond words. My words, anyway. 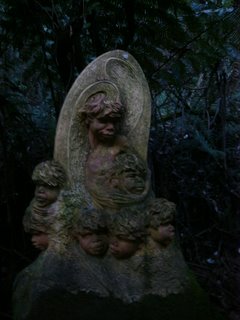 What we reckoned is that this guy is an Aboriginal trapped in a white man's body, and, unfortunately for him, born before his time. He was trying, with all sincerity, to get into aboriginal culture but all he managed was to produce very many versions of the same three scupltures he had in his head. 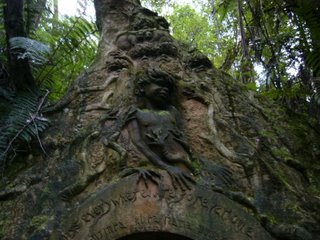 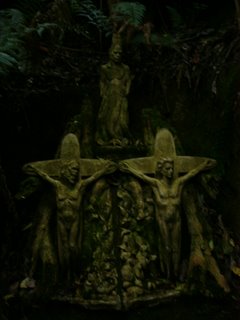 Have a look at these picture, which are amongst the ninety four or so on display in the Sanctuary. The whole thing is so weird I am still trying to get my head round it.

Wow, I really took some shit pictures didn't I. I managed to make Melbourne look really shit, all grey and freaky and weird! Sorry, Melbournians!